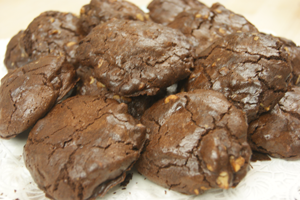 Best to be seated when first tasting!

Many years ago I was in Soho and there was this place called the Soho Charcuterie. I wandered in and they had these big hunky chocolate cookies that were chock full of pecans, walnuts and chocolate chips. I bought one of these super pricey cookies ( price was never anything that deterred me when it came to baked good-after all, what’s an extra dollar or two for the amount of sensual pleasure derived from an extraordinary taste sensation). When I bit into the fudgy center I became delirious. I know that this was a cookie that HAD to be at Rosie’s. I bought the cookbook and over the years this product has evolved to what I feel is even better than the original. It is kind of the cookie counterpart of a great brownie. I have a customer who comes in every day and has two of them throughout the day, and let me tell you that is a feat! At one point he decided that he was going to lose a few pounds so instead of the two Sohos, he switched to two Chocolate Chip Rugalah a day for a while until he dropped the weight…now THAT’S a sensible way to cut down on calories!!