I have just returned from Treasure Beach Jamaica, a magical community on the western part of the island that allows you to step in and experience the local culture and people. I brought my cookbook along in the hopes of sharing some of the recipes.

I was told about Dawn, a local woman, who had started a small restaurant of her own, where she specialized in breakfast, roasted her own coffee and did dinner to order. I went there for her ackee and salt fish breakfast with johnny cakes and fresh O.J., a breakfast of champions that  draws in locals and visitors to the community. I asked her if she would like to do some baking with me from my book. She was absolutely thrilled at the opportunity to learn something new. And I was thrilled to work with her the tiny little back room kitchen  where she was able to produce all her meals. 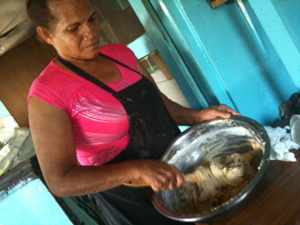 It was hard for me to imagine that a good chocolate chip cookies or a Rosie’s oatmeal  cookie with raisins and local fresh shredded coconut would not go over well with her guests and especially with the local boys who play pool every night in her little bar/pool  room adjacent to the restaurant.

I had to adapt some of the ingredients in the recipes in that the Jamaican brown sugar is more crystalized and slightly lighter than ours, and the flour a bit finer.  When we made the oatmeal cookies, Dawn did not have molasses so I substituted honey. And, the addition of the fresh coconut, which Dawn actually grated herself from a fresh coconut had a different texture than the coconut that I use back home, and, there were chunks in the mixture that chipped off as she grated, which created a wonderful texture and flavor in the cookies. I had brought the chocolate chips from home because we would have had to travel far and wide to have found them in Jamaica.

Working with the oven was difficult because in Jamaica the temperatures on the ovens are registered in Celsius. Since I did not have access to my computer for a conversion,  I had to do some trial and error  baking with individual cookies before I had the wherewithal to bake a whole tray of them. Dawn does not use measuring cups or spoons for anything and she claimed that after watching me one or two times with my measurements, she would have imprinted the recipe in her brain. 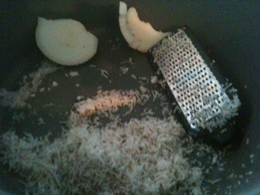 After we made the cookies, we tried my Pineapple Upside Down Cake. Dawn had made her own version in the past, and, although I had envisioned using fresh cut pineapple, she pulled out a can of traditional slices like the kind used by most of us in the states. She claimed that the juice in the can, in her opinion, was a plus. Although we used the recipe in my book, she did insist that we add a bit of the canned juice to the pineapple as it simmered in the brown sugar/butter mix in the skillet. She liked cooking the pineapple in the mixture for longer than the recipe called for to increase the caramelization before the cake went into the oven, and I have to admit that I liked the outcome.  It was wonderful to share our knowledge and out love for baking and it is a relationship that will continue through out the years. 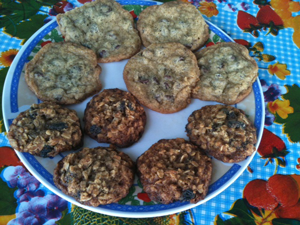