I remember my father making pears stewed in red wine when he wanted a dessert that was both elegant and nonfat. When my friend Janet invited me to dinner she asked me to bring a dessert to serve after her fish stew entrée. For some reason, the pears popped into my mind as a perfect ending to her meal.

After perusing various recipes on the web and getting the basic gist, I proceeded with my dessert. I remembered my Dad using Bosc pears because they were harder and would maintain their structure better during poaching. I peeled the pears making sure to keep the stems intact since they add to the visual presentation of the dessert; pears have a very graceful shape. I punctured the surface of the pears so that they would be more absorbent and placed them in a spaghetti pot so that they could sit securely upright, like little soldiers, while they poached.

Next I poured, a tall bottle of a deep red wine which I had picked up at Urban Grape in Chestnut Hill (Shiraz or Burgundy is good) and added enough water so that the liquid covered the pears. I used some Truvia to keep it light and a couple of tablespoons of brown sugar to add richness. I added 2 good sized orange peels, a little fresh lemon juice, a whole clove, a pinch of salt, and about a quarter of a cup of balsamic vinegar. I brought them to a boil, covered them and then turned the heat down to a simmer and continued to cook them until they were somewhat tender, but not mushy, about 30 minutes. After they cooled in the pot, I placed the pot in the fridge for two days so that the pears would continue to soak up the rich and pungent wine mixture.

The day that they were to be served, I removed the pears, which were now a beautiful garnet color. I cooked down the liquid until it was reduced to a thick  syrup which I planned to pour over each pear when I plated it. I decided that the dessert would be even better with the addition of a honey sweetened Greek yogurt drizzle (easy to throw together: 2 ingredients/yogurt and honey! ) 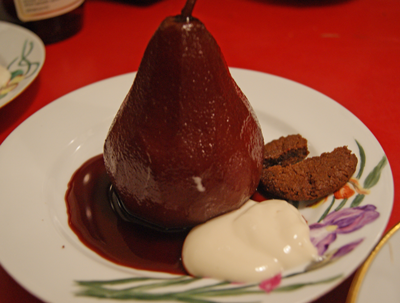 Perfect ending to an Italian Meal!

Fortuitously, I just happened to have some small ginger molasses cookies that I had over baked the day before. With the over baking, they had become ginger “snaps” which I decided to serve as a little accent along with the dessert. When I arrived at my host’s house with the components, she could not believe that I had chosen to make the pears. In the recipe text for the fish stew she had made, the suggested dessert was pears poached in red wine…miracles can happen!!