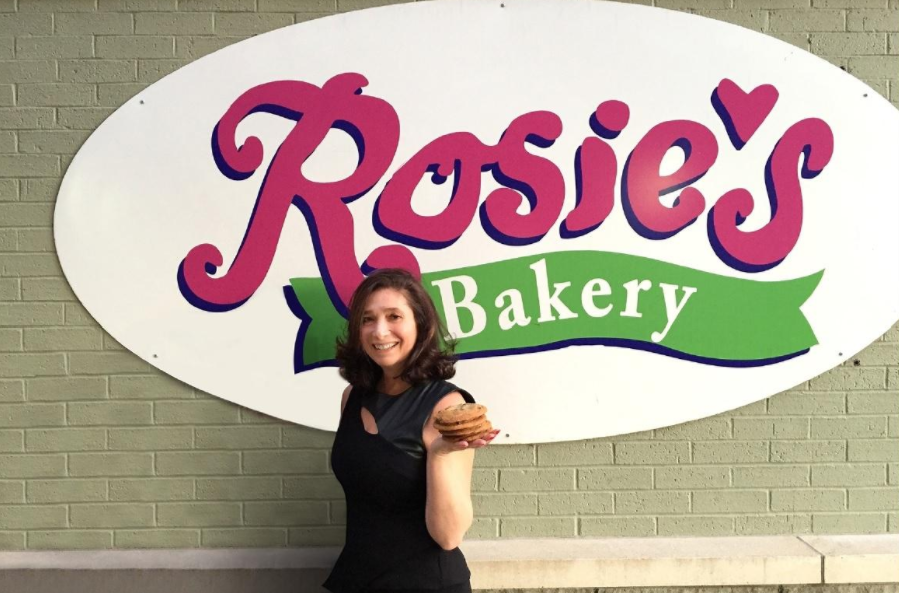 After 42 years, the owners of iconic Rosie’s Bakery, Judy Rosenberg and Eliot Winograd, were looking for the right person to entrust with their legacy of top notch baked goods that evoke the pleasure of home made. Both now grandparents, they wanted to spend more time with their families, and Rosenberg was eager to return to her art which had been a springboard to Rosie’s creations.

The original Rosie’s opened in Cambridge in 1974, when there was a paucity of bakery/cafes. The store arose from Rosenberg’s passion for baking using fine ingredients, and tweaking the balance of flavor and texture so that each cookie, each pie or cake was the best it could be. After so many years of love and dedication, Rosenberg and Winograd would not pass Rosie’s to just anyone.

Working in High Tech right from graduation, she worked steadily for 10 years, putting bonuses toward real estate and shifting her focus from IT to matching buyers with buildings.

Laffer was ready to combine her business acumen with her devotion for recreating the unconditional love she experienced while baking with her grandmothers Rosa and Rita when everything was made from scratch and shortcuts did not exist. She remembers those simple times and pure ingredients, and was convinced that if everyone could experience the purity of this kind of love, the world would be a better place.

Laffer’s appreciation of delicious, high quality baked goods was evident to Rosenberg and Winograd and a sale was welcomed by all.

“I treasure Rosie’s brand and Rosie’s love; I see it as precious wine that needs to be stored, served and handled with care and affection, so I was looking for the perfect ‘vessel.’” said Laffer.
Laffer took over Rosie’s in June of 2016, and has catapulted Rosie’s into the world of distribution, wholesale, and multiple retail presences while maintaining exceptional quality.

Being a single mom of two young children, it was an enormous undertaking. It took over a year of dedication with consultation and guidance from Rosenberg.

The entire cake line, including Snow Queen and Velvet Underground, as well as Rosie’s five star Chocolate Chip Cookies, Chocolate Orgasm and Boom Booms are as mouth watering as ever. Rosie’s has now moved to Brighton where all the baking magic continues, although there is not a walk in Rosie’s bakery/store.

Rosie’s loyal customers will be able to purchase Rosie’s handmade goodness at Athan’s Bakeries in Brookline and Brighton. Customers can also now enjoy a warm Rosie’s chocolate chip cookie with milk while relaxing at the SuperLuxe cinema.

Laffer also plans to distribute Rosie’s award winning cookie dough in area stores and cookies will be baked at both Kosher (yes the batter is made in a Kosher kitchen) and traditional supermarkets.

Pairing her passion for preserving the essence of Rosie’s delectable goodness with her determination to reach people in new and broader ways, Laffer will be introducing online ordering with direct to consumer shipping.

The integrity of the product matches the enthusiasm of her intent. Although the transition has not been without sentiment, Laffer greets the future with open arms.

Starting November 12th, phone and online orders, including those for the beloved Winter holiday desserts can be picked up at Athan’s Bakery in Boston, 407 Washington Street or in Brookline at 1622 Beacon Street.